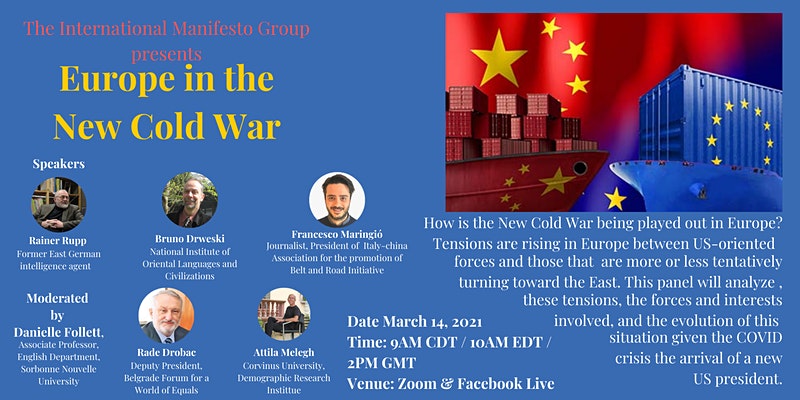 Our friends at the International Manifesto Group are organising a webinar on the issue of Europe in the New Cold War, on Sunday 14 March, 2pm GMT / 3pm CET / 9am EST / 6am PST / 10pm China.

You can register at Eventbrite.

How is the new cold war being played out in Europe? Tensions are rising in Europe between US-oriented forces and those that are turning toward the East. This panel will analyze these tensions, the forces and interests involved, and the evolution of this situation given the Covid crisis and the arrival of a new US administration.

Bruno Drweski, historian and political scientist, co-director of the Polish section of the National Institute of Oriental Languages and Civilizations (INALCO), Sorbonne University, Paris, France. He is a member of the directory board of the French anti-war and anti-imperialist organisation ARAC.

Attila Melegh, sociologist, economist and historian. He is associate professor at Corvinus University, Budapest, and a senior researcher at the Demographic Research Institute. His research focuses on global social change and international migration. He has taught in the United States, Russia, Georgia and Hungary. Author of several books including On the East/West Slope, Globalization, Nationalism, Racism and Discourses on Central and Eastern Europe published at CEU Press. He is the founding director of Karl Polányi Research Center at Corvinus University and editor of Eszmélet.

Rade Drobac, Deputy President of the Belgrade Forum for a World of Equals, former Serbian ambassador to Hungary.

Rainer Rupp, economist, former intelligence agent with the Foreign Intelligence Service of East Germany (HVA), for which he succeeded in penetrating NATO headquarters in Brussels in 1977, where he made a career in the political affairs division. In 1993 “Topaz” (his nom-de-guerre) was uncovered and arrested, and in 2001 he was released from prison. Already from his prison cell he started writing regular commentaries for socialist newspapers on politico-military and geo-economic developments.

Francesco Maringió, journalist, President of the Italy-China Association for the promotion of Belt and Road Initiative.

This call will take place over Zoom and will also be broadcast in real time over Facebook Live. Register on Eventbrite to join on Zoom.

The International Manifesto Group began discussing the evolving political and geopolitical economy of the world order and its national and regional components at the beginning of the pandemic. It has members from around the world, from north America to Japan. You can watch past IMG events here.

While the event is free, we appreciate donations to the Geopolitical Economy Research Group. A suggested donation of $5 would be appreciated as it is a non-profit. Once you have registered, please donate here.