News: Over 40 progressive US groups urge cooperation with China on tackling climate change 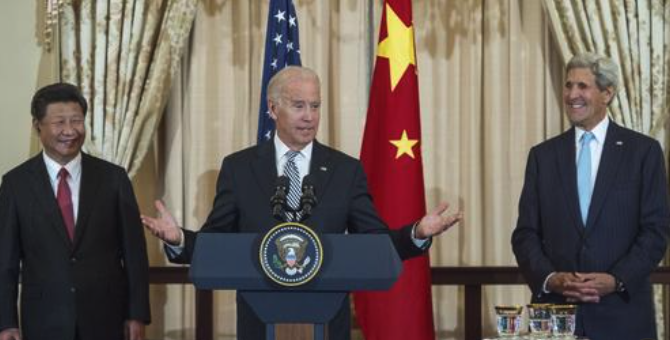 The following letter, signed by 41 progressive organizations, was sent to president Joe Biden and members of the US Congress on Wednesday 7 July 2021, urging them to reject a Cold War mentality and instead develop a cooperative relationship with China in order to tackle the issue of climate change.

Cooperation, Not Cold War, To Confront the Climate Crisis

Dear President Biden and Members of the U.S. Congress:
Climate change is a global crisis. Confronting it requires global cooperation.

While we are encouraged by stated commitments from the United States and China to work together and with other countries to enact urgent climate policies, we are deeply troubled by the growing Cold War mentality driving the United States’ approach to China — an antagonistic posture that risks undermining much-needed climate cooperation.

We, the undersigned organizations, call on the Biden administration and all members of Congress to eschew the dominant antagonistic approach to U.S.-China relations and instead prioritize multilateralism, diplomacy, and cooperation with China to address the existential threat that is the climate crisis.

The escalating, bipartisan anti-China rhetoric in both Congress and the White House damages the diplomatic and political relationships needed to move forward boldly and cooperatively. It also bolsters racist, right-wing movements in the United States, fuels violence against people of East and Southeast Asian descent, paves the way for higher U.S. military spending, and, critically, does nothing to actually support the wellbeing of everyday people in either China or the United States.

Like the pandemic and so many of our most urgent crises, climate change has no nationalistic solutions. To combat the climate crisis and build a global economy that works for everyday working people — in the U.S. and China alike — we must shift from competition to cooperation.

A managed decline of worldwide fossil fuel production — with a just transition for workers, communities, and countries dependent on the fossil fuel economy — is a necessity to address the climate crisis. The steps each country takes to address this global crisis should be commensurate with historical responsibility and wealth. In other words, the U.S. can and must do much more than China if the world is to equitably stay on course to limit global temperature rise to 1.5 degrees Celsius.

The cooperation we need to solve the climate crisis depends on the United States committing to its fair share of climate action, including making urgent domestic emissions reductions and scaling up international climate finance for developing countries — truly leading by example. Regrettably, U.S. politicians have long scapegoated China as an excuse to avoid global climate commitments. From the

U.S. refusal to join the Kyoto Protocol to efforts to water down the Paris Agreement, the U.S. demonization of China has always been a major barrier to progress in global climate talks.

Both the U.S. and China bring complementary strengths that could be combined in a transition to a clean global economy. For example, the U.S. is the world leader in clean technology research and controls immense financial resources; China is the world leader in industrial capacity across a number of clean energy industries and is a major source of infrastructure financing across the Global South. Working together could speed the transition away from dirty energy economies. It could also ensure that the countries and communities benefit from the local extraction of raw materials essential for clean energy supply chains.

China and the United States should not only work together to support international best practice environmental, human rights, social, and governance standards, but also to ensure that producer countries and communities have access to affordable and clean energy — and the resources needed to mitigate the impacts of climate change.

Financial support for poorer countries, the open sharing of green technologies, a rewriting of the rules of trade, an end to the regulatory race to the bottom — the United States should be working with China to institute these changes. Doing so is not only a matter of global justice, it is an investment in our mutual security and collective survival.

Amid a climate emergency that is wreaking havoc on communities across the globe, the path to a livable future demands new internationalism rooted in global cooperation, resource sharing, and solidarity. Nothing less than the future of our planet depends on ending the new Cold War between the United States and China.