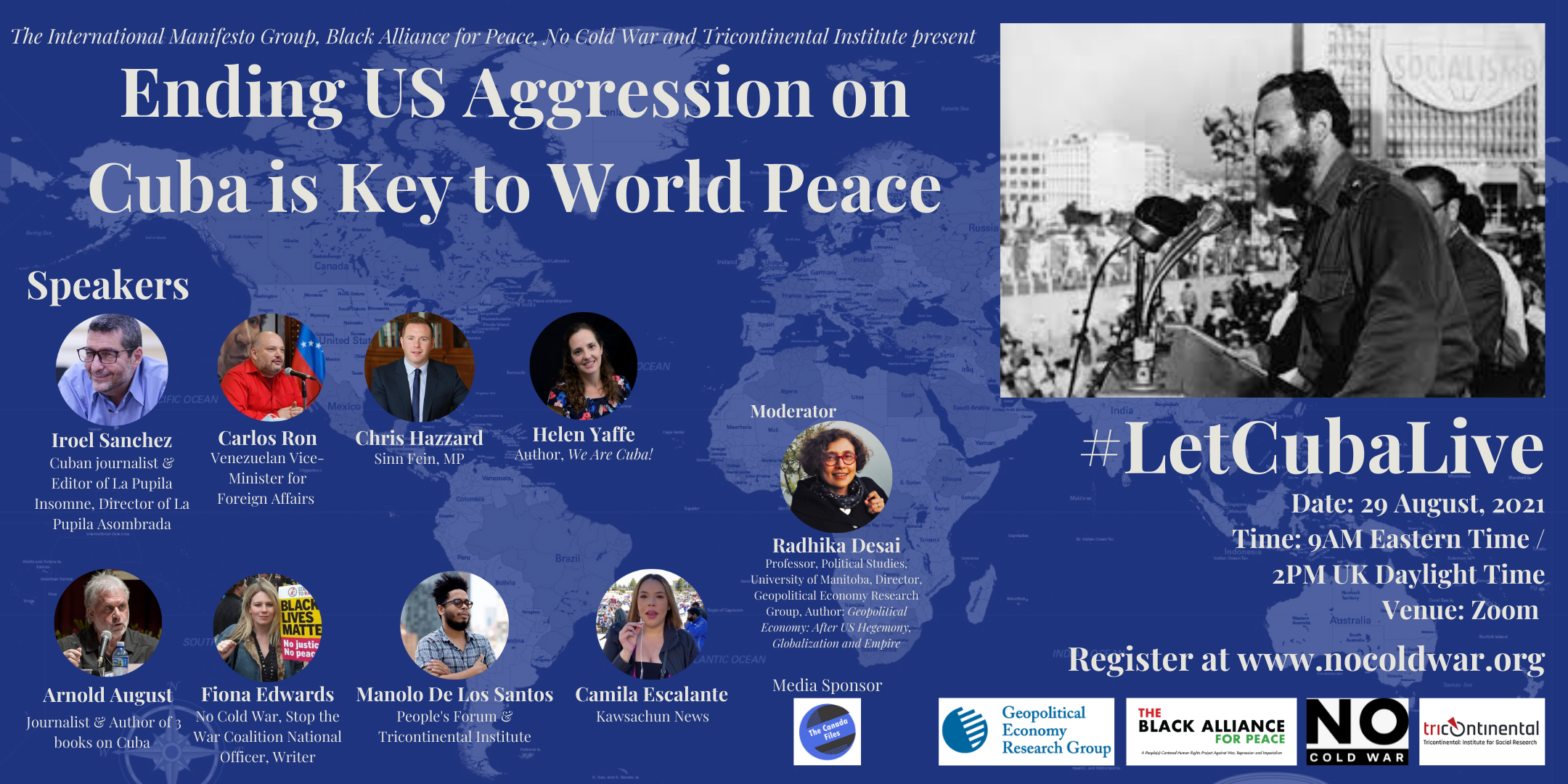 The International Manifesto Group, No Cold War, the Tricontinental Institute and Black Alliance For Peace are proudly co-hosting the following international online meeting.

Ending US aggression on Cuba is Key to World Peace
You can register your place for this zoom meeting here.
Sunday 29 August 2021
9AM Eastern Time/2PM British Summer Time

This international meeting analyses why Ending US Aggression Against Cuba is Key to World Peace.

The Trump regime’s tightening of the US blockade on Cuba, with 243 new sanctions, has unfortunately been intensified by the Biden administration.

Despite the recent 184 to 2 vote in the UN General Assembly against the US economic blockade of Cuba, the new US Administration had imposed new sanctions going beyond even those of Trump.

These unilateral actions are a threat not only to Cuba but to world peace. They constitute an attempt by a single country to impose its policies on the international system, in pursuit of a cold war, in defiance of the overwhelming majority of other countries. Success in such a policy would undoubtedly lead to further aggression and defiance of international bodies and opinion.

Clearly the aim of this is to increase hardship for the Cuban people and provoke a “colour” counter-revolution – to try to regain control over the island which 60 years ago broke free of colonial control.

The attack on Cuba’s people comes when forces seeking national independence social progress and economic development are strengthening across Latin America – as recent elections in Bolivia and Peru and the US inability to overthrow the Bolivarian government of Venezuela attest. In Brazil, the left’s candidate, Lula, has a 26% poll lead for the 2022 Presidential election compared to the candidate of the right and the US – Bolsonaro.

By punishing the Cuban people, the US clearly intends to send a threatening message in particular to all Latin Americans: this will be your fate if you resist our demands.

Therefore, today is a crucial moment for all those who stand for national independence, for social justice and equality and for a multilateral world as opposed to unilateral diktats of a single country, to understand the importance of this situation for every country and to add their voices in opposition to the US unilateral policy against Cuba.

This international meeting analyses why Ending US Aggression Against Cuba is Key to World Peace.

This meeting is organized by the International Manifesto Group, No Cold War, Tricontinental: Institute for Social Research, and Black Alliance For Peace. The Media Sponsor for this event is the Canada Files.